One of the bravest efforts at the Le Mans 24 hours race, in my opinion, has to be that of the 997cc Mini powered, rear wheel driven Deep Sanderson 301, designed, built and raced by Christopher Lawrence himself with co-driver Christopher Spender. 1963 Was the first year the little team made it to the French endurance race and two more were to follow. I found quite a few pictures of Deep Sandersons at Le Mans and it took me a while to find out which cars drove when, but for 1963 it is pretty straightforward as the team did not go to the test day in May and clearly showed its numer 44 during the race. Another 301 was entered and was supposed to be raced that year, wearing number 45, by the French 'Equipe Lausannoise' of Renault tuner Bernard Collomb, but it never made it to the track. Most fragments below are from Lawrence's autobiography 'Morgan Maverick' and give a wonderful sense of the event.

"Strangely, we had no troubles with the the scrutineers, being the only English car in the 1000cc class with three Alpine Renaults, three René Bonnets and two Italian Abarths. We had no real problems during practise either, except for a total refusal by the car to steer properly in a straight line. It was really very good in the corners but along the straight it was truly awful. Nothing we did seemed to make any difference and I suppose we slowly got used toit and got on with it. (...)"

"I did the first stint obviously, lasting for four hours. 21 Gallons, 1000cc, drag coefficient of .29 and a frontal area of eleven square feet saw to that. The car could do 150mph plus along the Mulsanne straight. It had been timed during practice through the time trap about a mile after Les Hunaudières café at 152.6mph. I brought the car into refuel at eight o'clock and handed over to Christopher in 37th place out of the 52 cars that started. Unfortunately, Christopher put the little car firmly into the vast sandpit on the outside of Mulsanne corner on his first lap. He had arrived there going very fast, braked too late, and just slid off the road into the sand. (...)"

"With its 10 inch wheels and low ground clearance, trfying to drive it out immediately burried the rear wheels until the engine and under body were just sitting on the sand, and although he tried everything he could think of to get it out, including digging away the sand from beneath the car with his bare hands, he was getting nowhere. We were getting a blow by blow report from our signallers who were right opposite the action, totally unable to do anything but hope."
"Salvation came in the end from a kind corner marshal, who threw a decent sized branch off a nearby tree to Christopher, who was able to use it as a lever to force the car onto former ground and then away back to the pits. (...) We found nearly everything full of sand, including the rear brake drums, which were just stock Mini. We did our best to clear things out but with so much time allready lost, I was keen to get going again."

Lawrence continues the race and describes comprehensively how he managed to go on racing the Deep Sanderson, even when the brakes have stopped working. At 00:30, eight and a half hours after the race started, he was supposedly lying 40th. At 4:30 in the morning he writes he was 26th and second in the 1000cc class. But then he was flagged off as the car had been behind its minimum average speed at midnight. Lawrence writes: "The rule was that all cars must maintain a speed within 10% of the leader of the class, and this is checked every four hours. They said they had checked our speed at the time but in retrospect, minimum average had not been achieved at eight hours in. (...) Obviously, we probably were well off the pace at the midnight check time, but why had they waited untill nearly 12 hours later to take any action? Could it be that we might actually win the 1000cc class, normally the preserve of the French tiddlers (...)? In actual fact, no one won the class, as no 1000cc cars finished. The number 50 Alpine went out at 14:00 hrs on Sunday with a broken con rod. So the 301 was the only running 1000cc car left at four o'clock on Sunday, but that was locked up in parc fermé."
But the Deep Sanderson team was to return the next year. Watch this space for that story.

PS: I have seen pictures of the car in the sand pit but am unable to find them at the moment. As soon as I do find them I will post them here. 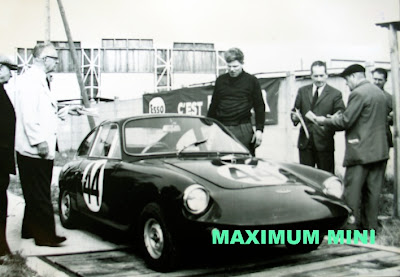 And here the Deep Sanderson 301 can be seen on the weighbridge, I wonder what it weighed 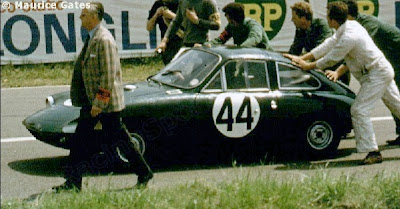 I think it's being pushed to its starting position here. A traditional Le Mans start that is
Picture: Maurice Gates 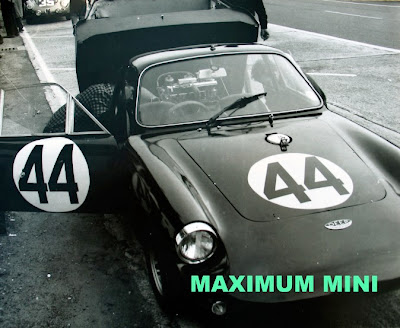 The Deep Sanderson 301 in the pit street with the rear section open, showing the Mini mill with SUs 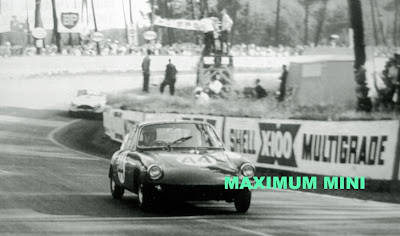 Chris Lawrence behind the wheel of his own car coming out of the Esses. A dream come true? 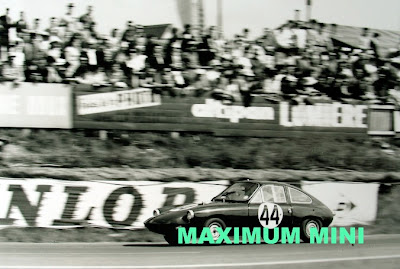 Rare picture of the car at full speed at the Mulsanne straight. It was said to do 150+mph there 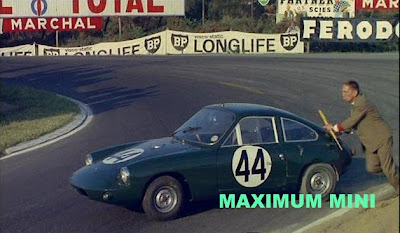 Bad luck at Le Mans. The Deep Sanderson slid and had to be dug from a sand pit
Update: seconds after this picture was taken No.44 was caught on film. Click here