Wow! This is what I have set up this blog for. Kevin Boole, who sent me his lovely Bulanti story (see here) e-mailed me earlier today, writing: "It is amazing what the world wide web can do to aid research", only to receive another message from Australia two hours later that threw a new light on the case.

This time it came from Henry Draper. Henry wrote: "Hi Jeroen, I have just looked at your blog re Bulantis. I am the owner of two of them and also some body moulds. I have had the original alloy bodied one for a few years. It is the one shown in the youtube hillclimb shots (as here). I have never had that one running, it needs some work but is complete. The other I have only bought recently from Sydney. Unfortunately I got very little history with it as the owner was in a nursing home with Alzheimer and his wife and son could not tell me a lot. It did come with a spare Cooper S motor and a turbo set-up which perhaps indicates it is the car in your blog. It is painted purple now though! I did get this one running and have driven it a few hundred yards but no brakes and it had been unused for some time so it also needs some TLC."

"I don’t know when this will happen as there is quite a list of projects here. I have just bought a JCW Mini Challenge race car to play with (and a written off one for spares) and I also have 1964 Morris Cooper S historic racer, 1961 Morris Mini Minor tarmac rally car, Mini Marcos, Ex works (maybe) rally car and a brand new 1978 mini Pick-up shell - never used. When the weather is better down here and I have time I might be able to get the Bulantis out and take some pics for you if you are interested."

You bet I am! Thanks Henry, and Kevin once again! 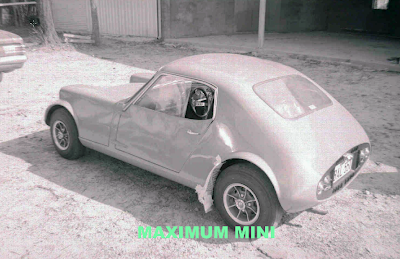