So Le Mans 2011 is finished with another Audi win. Not particularly exciting isn't it? Let's have a look at the French endurance race of 1964 when adventure rather then money ruled at the La Sarthe circuit. We have seen that 1963 brought plenty of troubles for the little Deep Sanderson team (click here if not), but Christopher Lawrence and his team were detemined to return the next year, and did just that. For 1964 there appear to have been cars with number 40, 42 and 66, but in fact the first one was the car that was entered for and driven by Lawrence on the Le Mans test day in April, where it did well. For the actual race on June 22, two cars were entered and they were both equiped with Downton tuned 1295cc engines that were finished much too late and had to be installed hastily just days before the race was to start in France.

One of them was to be driven by Lawrence himself with Morgan racer Hugh Braithwaite (No.42) and the other by Christopher Spender and Eamon 'Jim' Donnelly (No.66) with Gordon Spice as back-up for both cars. But things did not go to plan when Braithwaite gave up after only having driven the car in practise. Gordon Spice wrote: "The professional (Braithwaite-JB) did precisely one and a half laps, declared his passion for life greater than his love for Deep Sandersons, packed his bags and went home!" And that was not all. Disaster struck when Donnelly crashed the No.66 car in the evening preceeding the start.

Lawrence, about the practise in his autobiography: "It took me three pit stops before I was happy to hand the car over to my co-driver, Gordon Spice. I then made an understandable but never the less serious mistake. I called Jim Donnelly in so that I could re-set his engine to the same state as mine and sent him off again. With his engine now really pulling and the 1295cc's extra torque very much in evidence, the car's acceleration away from Arnage was truly sensational which resulted in Jim arriving at Whitehouse about 75mph (120kph) faster than on any previous occasion. Whitehouse, for us, if you got it dead right, was just about flat but on this, his first attampt, Jim did not get it quite right enough, and he went off the road and totalled the car. He himself was fine."

That left the Deep Sanderson team with just one car that was hardly run in properly. It was now decided that Lawrence and Spice should race the No.42 car. Gordon Spice, who made a great racing career, said many years later: "Forget about testing it before the race, we all knew that straight out of the box we had a winner on our hands. Just to be sure, however, I was voted to shake the new car down on the drive from Le Havre to Le Mans, followed by the rest of the team in a Mk VII Jaguar with trailer and spares. After the second spin, caused by pretty basic suspension problems (so I claimed), it was decided to pick up the pieces and put the car back on the trailer. The three-lined French roads were no place for our Le Mans contender! (...)" "Talk about luck. Here I was at the tender age of 24 with all of a dozen or so club races behind me, now with a confirmed drive at Le Mans in a class winning car! We managed to qualify the car during the last session of the second day's practise. And then the great day arrived. However, my joy turned to despair when, less then an hour into the race, Chris brought the car into the pits with a blown head gasket and out of water. I thought it was the end of the world: how little I knew about endurance racing!"

Lawrence writes in his autobiography that it took him longer than that: "About five or six minutes into my third hour - we could still do four hours - the water temperature, which had been dead steady on 88 degrees Celsius started to rise and quickly went off the clock, clearly caused by a blown head gasket, so I limped back to the pit. With over an hour and a half before we could put any more water in it, even if we had changed the head gasket, we were effectively out of the race. Altogether a pretty dismal eight days." 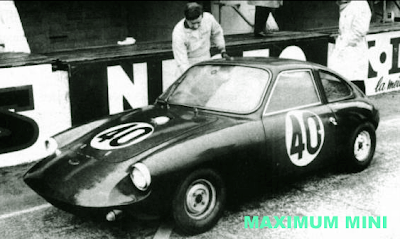 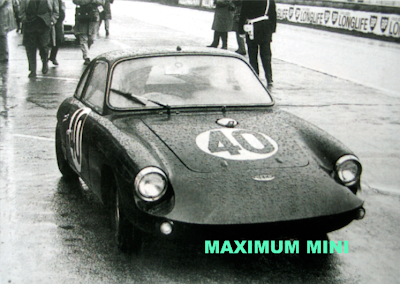 No.40 Deep Sanderson in the pit street on test day. Despite rain the car behaved well 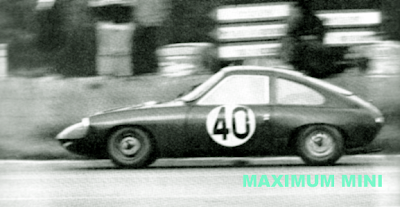 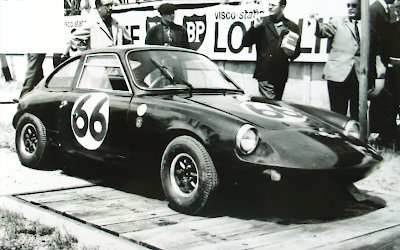 Le Mans 24 hours 1964: No.66 on the weighbridge, it now came with 1295cc engine tuned
by Downton but delivered far too late and thus not run in
Picture: Beroul 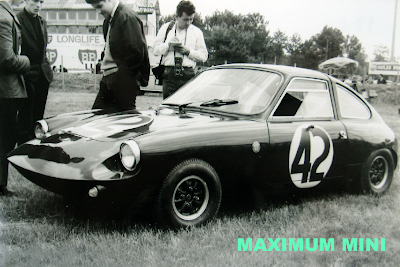 And its sister car at the same day: Deep Sanderson No.42, to be driven by Lawrence and Spice
after racing driver Hugh Braithwaite had given up after a lap and a half 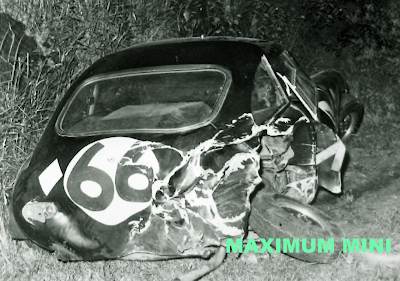 Disaster strikes when Donnelly crashes Deep Sanderson No.66 in the night preceding the race
in Whitehouse corner. Note aluminium body work: this is no fibreglass 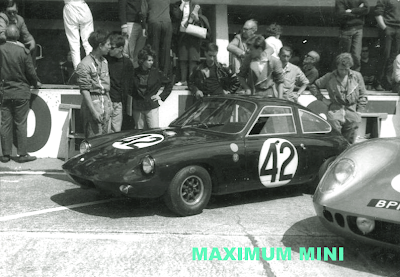 Fortunately No.42 does make it to the start. Note next to tiny Deep Sanderson the big
Shelby Cobra coupe that came in fourth overall. David and Goliath? 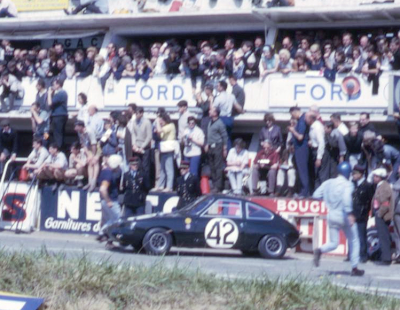