Been sitting in the garden, reading motoring magazines, lately? Our man Buffalo Bill definitely doesn't hang around like that! He wrote:

"I have removed the Weber for now, it is so over cammed that its impossible to shunt around the garden with it on, it needs a good strip and clean as it will tick over but with any throttle load it just stalls - a pair of slave twin SU's are in place and let it start and run fine - handily the bar that links the rear towers unbolts (which I had to do to allow the jet tubes on the carbs to fit) and rebolts 1" lower down - handy! The clutch is done and it's better than it was before, but still heavy - something to do with the shorter pedal providing less leverage I guess." 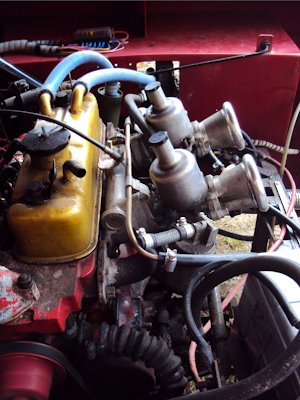 "I have also removed the exhaust, it was so loud the neigbours had started to 'mention' it, so for now its got a recycled RC40 box just to keep it at a more reasonable level - it's got the getto outside the body work look, but it works and will pass an MOT with it - I had to remove the black portion of the rear to repair it anyway, so now great shakes - it is a bit vile, but will do the job. I have won an Elise backbox on ebay, so may be able to make that fit. The problem is that the exhaust is limited by the boot shape - the boot needs to be fitted to hold the Targa top."

" I have also got the glass ordered - it was financially enlightening!! The people who make the glass said that the problem with mass produced car glass is that it is cheap because they make so much, and when I told the guy that the side window (which was the expensive bit) was from a one-off car he just went 'Oh, that must have cost the original owner a fortune to make...' It has to be CNC-cut because of the shape around the pill box electric windows - I've had it all remade in the correct light bronze tint as well, which cost a bit more. Igot the glass out tand can now retrim all the dash and pillers, then get the new glass back in the next couple of weeks. I have also started on the pop up lamps and used a MX5 motor in a bodged bracket to make sure it could lift the mechanisim, it did at a furious speed, so I have bought a complete pair of MX5 set up to try and use one to control both lamps - anything will be better then the shakey slow noisy motor that was in there before." 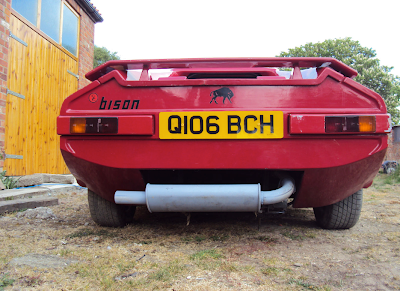 Exhaust, too, is a temporary fitment. Elise box may be better
"Then there's the tyres. These are pretty critcal as anything lower and the front spoiler scrapes on the floor due to the huge distance between it and front wheels - also the tyres need to be pretty chunky to match the wheel arches. I found a set of over 30 year old tyres on ebay that sold for over 200 euros!! I've now found that Avon do a CR500 245/50/13 which is about as near as I can get. They are well expensive (and on back order...) but I think I have found a part worn pair. Annoyingly Avon don't do a 205/60/13 to do the front, but there are plenty of tyres avalible in that size."

That all sounds as if it won't be too long before the car is on the road again. What is our man going to do then? He says: "If it drives okay I will keep it, if its an understeering deathtrap it's going!" Watch this space.
Geplaatst door Maximum Mini op 11:41