Could this really be the 1967 Le Mans Mini Marcos? UPDATE: It's not

An interesting picture was posted online this afternoon by a classic car enthusiast from Macau. It shows a Mini Marcos that was supposedly raced there during the Macau Grand Prix of 1969. According to the poster the car was an ex-works Le Mans car in 1967. Remarkably, the windscreen fits into that, as a tall windscreen can clearly be seen on the photograph, just like the 1967 Le Mans car had. The same goes for the light on the door. Could it really be that?

The full story of the 1967 Mini Marcos works Le Mans entry can be found here. After Le Mans the car was raced in Africa. But what happened after that? It is believed it remained there, only to be found in a derelict state and fully restored several years ago now. The car's works mechanic Mike Treutlein, whom I tracked down in 2010 (here), didn't know of its survival, though.


Also: the works racer had a sister car, which was light yellow in colour. The question is if that possibly could have had a modified windscreen also? If not, this new picture would throw an all-new light on the Le Mans car's survival. Naturally I have contacted the person who posted the image and he has promised me to come back to me. To be continued.

UPDATE 26 June 2020: This is confusing to me, too, but I now firmly believe this to be the 1967 Le Mans car after all now that new pictures have emerged. Full story here

UPDATE 1 July 2020: To further confuse you - I now draw again the conclusion it's not the 1967 Le Mans car but the FLIRT car after all. Full report (not for the faint hearted) here. 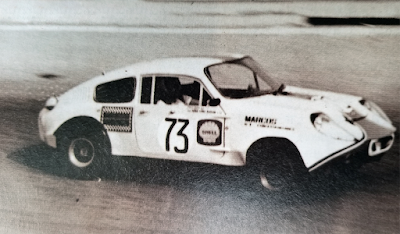 This picture shows a Mini Marcos during the Macau Grand Prix of 1969. It is believed to be the works car that ran at Le Mans in 1967. Could it really be that? The modified windscreen fits the bill
Picture Carros Classicos de Macau 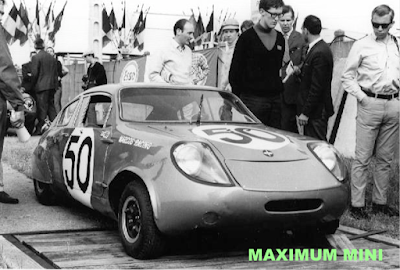 Let's go back in time. This is the works car on the weigh bridge at Le Mans on 10 June 1967. Note the windscreen here, which had just been modified overnight
Picture Jeroen Booij archive 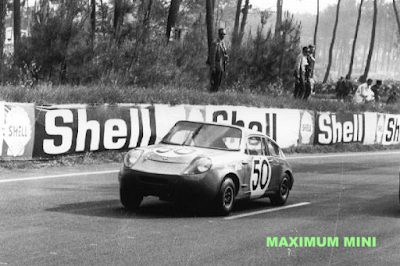 This is during the 1967 Le Mans race, still on the 10th of June 1967. The car made only a disappointing 13 laps before it had to withdraw from the race
Picture Jeroen Booij archive 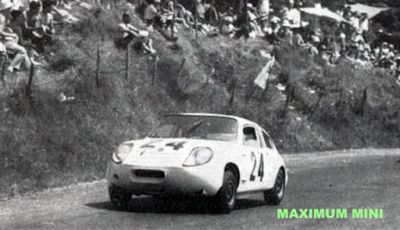 Mugello, 23 July 1967. This car is raced at the road circuit in Italy. Is it the same car repainted, or did Marcos change its sister car's windscreen also?
Picture Jeroen Booij archive 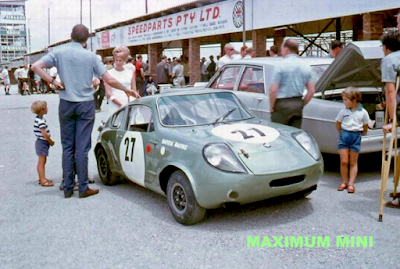 4 November 1967. The colour suggests this has to be the ex-Le Mans car. It is entered in the 9-hour race at Kyalami, where it comes 15th overall. Jem Marsh standing next to it
Picture Jeroen Booij archive 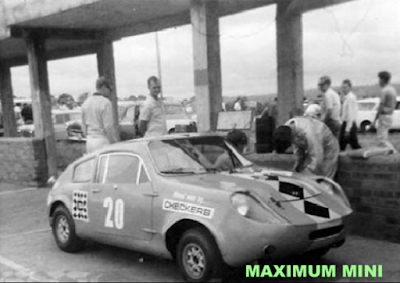 December 1967. The same car is raced in the Pietermaritzburgh 3 hours by Peter Kat and Dirk Manis
Picture Jeroen Booij archive 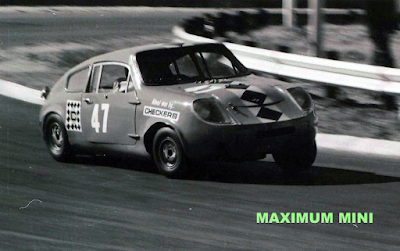 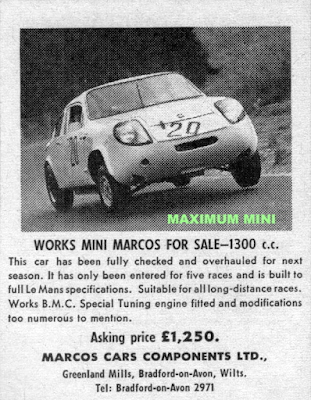 This car is offered for sale in the UK in late 1967, with the picture taken during the ADAC 500kms race in Germany on 3 September 1967. Is it the Le Mans car repainted, or is it its sister car with a modified windscreen also? - that's the question
UPDATE 26 June 2020. This certainly is the FLIRT car
Picture Jeroen Booij archive