Another great message from Peter Camping. He made me aware of a car I'd never heard of before, writing: "Hi Jeroen. This is, in my opinion, a great Special. It's a 1972 March 722 Formula 2 that's been modified into a hill climber with A-series power. The seller, which offers it for sale at the moment, writes: "This March 722 started out as a Formula 2 race car with the monocoque number AM 72-12 which we believe means that this single seater was a very early 722. It was then converted to a hill climb car. The two drivers / builders were engineers for British Leyland at the time and used their expertise and contacts to fit an A-series engine with some special motorsport parts and modifications, one of the mods they did to the engine was to turbocharge it, this was before the days of the MG Metro Turbo, and one can't help wonder if this helped the development of the 1275 turbo engine used in the Metro Turbo? In fact there are letters between British Leyland's 'Special Tuning' department and the drivers detailing recommended modifications and parts to be used. It is also apparent that British Leyland picked up some of the bills by way of sponsorship of the car judging by the invoices to the 'Sales and Promotions' department of BL. Season reports from the drivers to BL show that the car performed well at Shelsey Walsh on various occasions. AM72 -12 has been laid up for many years and came to us with a healthy coating of dust, but it does appear to be complete apart from a fuel tank and a couple of rubber pipes missing."

These two drivers / builders were Rob Oldaker and Andy Smith and indeed they did well with their A-series powered Special. As a matter of fact they had more than 20 class wins in the National Hillclimb championship and had several top three championship positions notched between 1975 and 1980. The duo even managed to be the first in the 'Supercharged Shelsley Special' class to break the 30 second climb at Shelsley Walsh, with Andy Smith recording 29.27 secs in August 1980 (a record not broken until 24 years later!).

Peter adds that the car was sold in an auction just a few ago also, when it sold for £6,384. More technical information from when it was sold then: "Mini short stroke engine of 1140cc to comply with the 1600cc unsupercharged class rules. This engine featured a Garret T04 turbocharger, without waste-gate, set at 1.7 bar with coolant stabilized inlet temperature control. Running on a methanol mix and an 8.3/1 compression ratio the engine was highly modified and was coupled to a straight cut, close ratio gearbox, a Salisbury LSD with Jack Knight low ratio final drive gear, and a competition clutch. Weighing in at less than 365 kgs (!) and giving close to 240 bhp, it was extremely quick and also handled and stopped superbly." See the car for sale here. 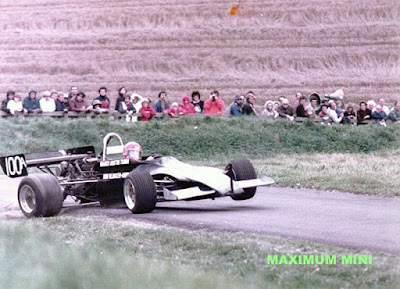 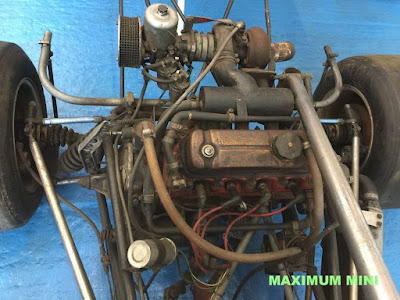 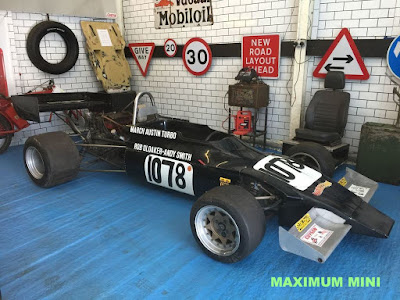 The car weighed only 365kgs and came with 240bhp. No wonder it set some records!
Picture cherubautos.co.uk 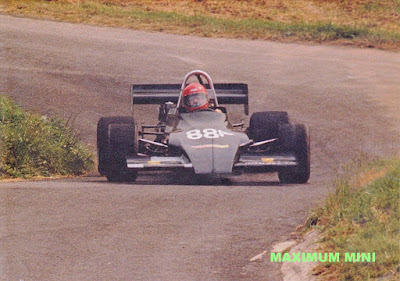 In action in its heyday. Oldaker and Smith had more than 20 class wins in the National Hillclimb championship with it between 1975 and 1980
Picture cherubautos.co.uk