A great piece about Mike Jupp and his Nimrod appeared last week on the website of insurer Adrian Flux. Jupp, who designed the car, tells how the car came about in 1969, although it took until 1972 to see the first car finished - the one he still owns and uses regularly. I have cut out some nice quotes from Mike from the interview:

"It was a time when everything seemed possible, a great time with the excitement and dreams of what life could be. There must have been something in the air at that time, or whether it’s about being young and idealistic, and your imagination can stretch. There are one or two things I’ve done in my life I’m so pleased about. I came up with an idea for a TV series and eventually watched it, and I came up with an idea for a car and, thanks to Ray, I eventually drove it. More than four decades later, it’s in my garage so I can still show it to people.

Mike recalls a journey to Transylvania in the Nimrod (picture here): “I had a case full of brand new cassettes – Pink Floyd, Rolling Stones, Yes, Deep Purple etc – and we got to this village and were immediately surrounded by a couple of hundred people all looking at the Nimrod. There was a bloke with a ghetto blaster. He only had one old naff cassette, the Red Army Choir or something. Anyway, I said ‘you may as well have this lot then mate’. He nearly died. One minute he’s got one ancient Soviet sing-along nonsense tape, then instantly, he’s got Western cool-dude hip stuff.” 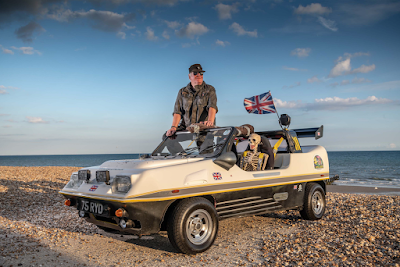 Mike Jupp and his Nimrod: "I’ve had it 46 years and I’ve still not quite finished it"
Picture Adrianflux.co.uk 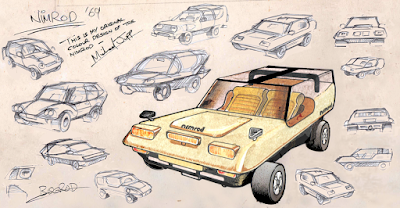 Jupp: "When it was finished, it felt surreal to be actually driving something that started out as a scribble on a bit of paper" That drawing can be seen here
Picture Adrianflux.co.uk 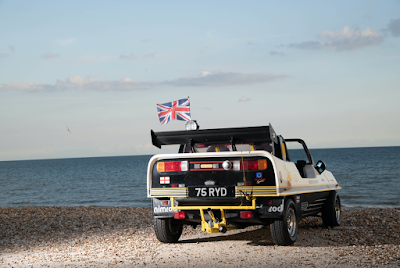 Mike plans to give his beloved Nimrod another revamp, in the style of one of his television series
Picture Adrianflux.co.uk 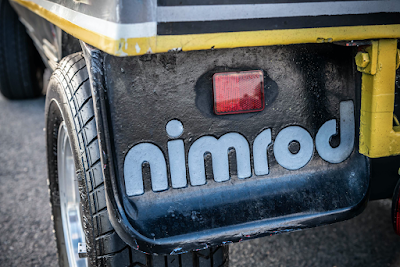 Chunky rear mudflaps were designed to give the car the impression of having real wide rear tyres!
Picture Adrianflux.co.uk 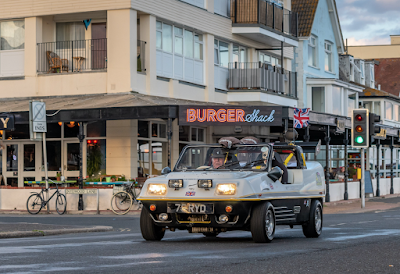 Not many people can claim to own their Mini derivative for 46 years! Mike drives his still regularly
Picture Adrianflux.co.uk
Geplaatst door Maximum Mini op 11:25