While work on the Le Mans Mini Marcos commences, I continue my researches to the car. Hints and tips keep on coming and while these often lead to nothing, sometimes they uncover fantastic new finds. When I heard of a somewhat obscure French historical photographic archive unknown to me I gave it a try never the less. A long (snail) mail conversation followed. And after many weeks of waiting I received a post package last weekend with no less than 40 pictures, all taken from original slides and all new to me. I'd never expected this. They were not just taken at the Le Mans 24-hours race, but also at earlier events at Monza (1966 1000 kms race) and Le Mans (1966 Essais) and later ones at Montlhéry (1,000kms of Paris 1966 and 1967) and Magny Cours (1968 races). It's gold for the book I am planning to write on the car. So keep those hints and tips coming.

Meanwhile, I also found that Decca published an LP in 1966 shortly after the 24 hours race. The undertitle is: 'The 34th Grand Prix d'Endurance - June 18 & 19, 1966. With Bruce McLaren, Graham Hill, Chris Amon, Carroll Shelby and the voices of the public'. I was very eager to have one, thinking it may even have recorded the sounds of my car... Eventually I found an excellent copy, bought it and by now listened to it, still not knowing if the whining sounds of an A-series engine with straight-cut gears can be heard somewhere on it! Perhaps you will recognize it? The complete sound track to the race has been uploaded on Youtube where you can listen to it for yourself here. Let me know if you hear more than I do! 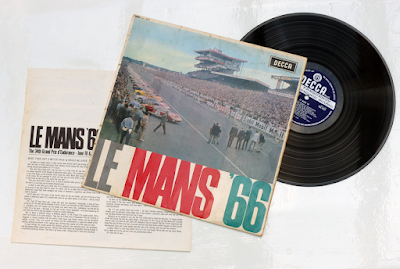 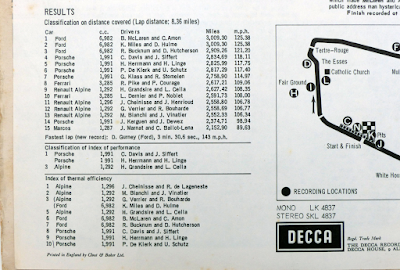 Booklet shows the Marcos in the official results. But can it be heard on the actual recording..?
Picture Jeroen Booij 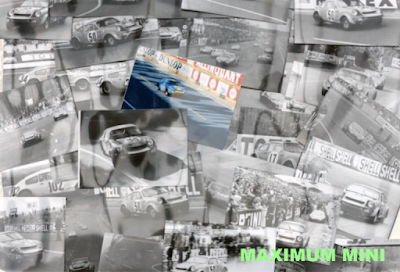