Another mystery Mini based creature that asks for some clarification. What is this three-wheeler seen below? Oh, hang on, I actually know what it is supposedly named: the RRS Wasp, since the pictures were published in Kit Car magazine with a few lines, many moons ago.
In fact the three-wheeler was spotted at the Stoneleigh kit car show in the late 1980s where it was brought to by then-owner Terry Chambers. Chambers had just saved it from a Lincolnshire scrapyard. He is said to have brought it to the show "to see whether anyone could identify it". To further quote from the article: "The car is built on a beautifully constructed steel tube chassis, the quality of which does not seem to match the standard of its styling." Perhaps anyone here knows more..?

UPDATE 6 November 2018: It survives and is for sale! Click here. 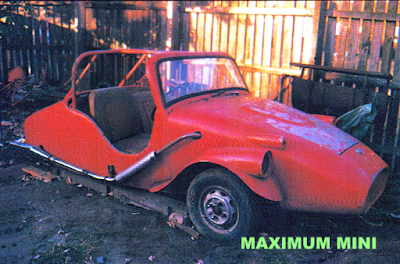 This is believed to be the (or a?) RRS Wasp. A three-wheeler shrouded in mystery
Picture Kit Car Magazine / Jeroen Booij archive 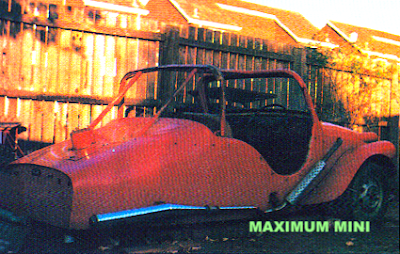