When was the last time you saw a Sabre Sprint? In my case, it's been a couple of years, so why not pay some attention to this little-known Mini derivative here? In fact, Sprint owner Wil Ker sent me some pictures of his car which he's had for a few years now.

He writes: "I see 'Buffalo Bill' keeps hassling you with his Bison news, so I thought I'd bother you with my Sabre Sprint. Although it has been turbocharged for 12 months now, I've never been happy with the carburettor. It was just impossible to calibrate properly, with a big compromise between cruise and driveability. So I took the plunge and fitted fuel injection. It's still early days and it needs tweeking, but I'm happy so far.  As it's a daily drive and fuel economy is key hopefully it'll pay for its self pretty soon. I am confident in saying that it's the only 998cc turbocharged fuel injected Sabre Sprint in the world, be nice to be proved wrong though!"

"On a seperate note, I'm soon to start making plans to get as many Mini variants (or other quirky kit cars such as Clans) joining me on a trip to the IMM in Hungary next summer. My plan is to do it as a charity run. My Nimbus will hopefully make it there too, being driven by a mate or my Brother." Now that's what I call a great idea mate. Who likes to join the club? 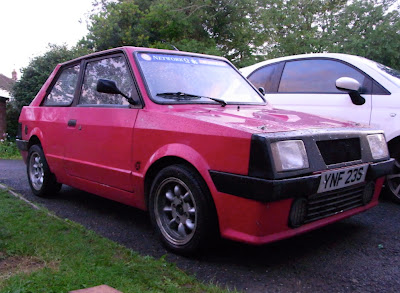 That's Wil's Sabre Sprint. Don't say it looks like a Mk3 Ford Escort. He knows that 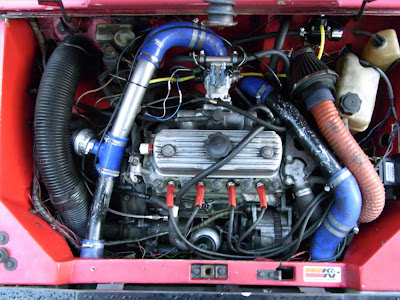 But, hey, you won't find that under any Sprint's bonnet. Mini engine, yes, but turbo'd and fuel injected!
Geplaatst door Maximum Mini op 15:56