Good news from the Camber/Maya front as I understand that another car survives. First there was this one; now it is the Camber GT registered NPM 14F (click here for more) that appears to be still with us, too. Rebecca, who got in touch, wrote: "I am emailing you on behalf of my dad. He built and still owns the Camber GT pictured on your site, registration NPM 14F. As a child I remember this car in the condition you show on the pics. Sadly it's not like that now as when I was about 7 he hit the dustbin lorry and wiped out the front, but he has kept it and is always saying he will one day restore it. I am now 38 and it still is in a sorry state. He has lots of photo's and info about them and I'm sure you would learn alot from him."

Rebecca was kind enough to give me her dad's phone number, so I got in touch with Derek to ask him a bit more about the car. Derek was more then happy to discuss the car and he told he'd built it in 1967 and taxed it a year later. He bought the kit directly from George Holmes who was in his late 30s or early 40s while Derek was 26 or 27 at the time. He used it as a daily driver and made a trip to Germany in the car in 1968 or 1969, remembering it felt pretty small on the autobahns in between all the big BMWs and Mercs! Originally it used the 850 engine of the Mini that Derek used as a donor, but after a few years it was replaced by a 1000. Another couple of years on and it was time to fit a 1300 with race cam and big valved Cooper 'S' head! According to Derek the big SUs that he fitted, too, were perhaps a bit too big.

On the few pictures on my blog, the car was black with a stripe, but according to Derek it had various colours in its earlier life. Originally it was red, but at one time it became gold with a yellow stripe and people used to call it 'the Banana Split'. Derek says the car needs a comprehensive restoration now but he has too much work on his hands to do that at the time. Funnily he met one of the chaps who used to work in George Holmes' workshop, building the cars. They got to talk about the Camber and Derek was given a brand new badge that he'd kept all the time. Derek says: "That makes me think it's got to be done one day!" When there's more time, he will look up his old pictures, so stay tuned for those. 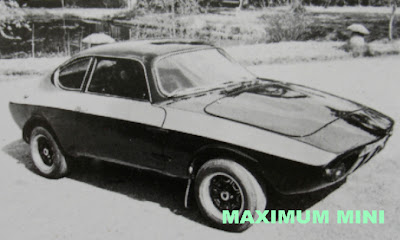