Look at these. They are tiny pictures that were sent over to me years ago. Because they are so small, I have put them together. But they show a super rare Mini derivative that I'd want to share with you never the less.

In fact, I believe it could be the only vehicle of its kind left in the world. It's the Autocars estate, based on a Mini and built by Jem Marsh of Marcos fame. So in a way it is a Mini Marcos, but not as we know it. Marcos built six prototypes for the motor manufacturer Autocars in Haifa, Israel. Four were estates, the other two fastback saloons. And according to Rory McMath who worked at Marcos at the time, they came in red, yellow, blue and green. At least one of the estates was used for crash testing at MIRA and three (two estates, one saloon) were shipped over to Israel. But production of the cars never came off the ground (an unlikely story - read it in my book, it's illustrated with nine more lovely shots, both historic and current).

What happened to the other cars is mostly shrouded in mystery. The saloon that made it to Israel ended in a kindergarten as a kiddies toy, but according to Yohay Shinar, who sent me pictures of it, it is gone there now. One of the estates, red in colour, is said to have been used by Jem Marsh's wife Judith for years and was spotted by Rory McMath some 10 years ago for the last time. The yellow estate car that can be seen here survived and was restored in the early 1990s after which it was exported to Japan. These snap shots were taken just after it arrived there, but it hasn't seen much use since. I saw the car twice while in Tokyo and unfortunately have to say it is a a considerably worse state now. That's, too, why I like these pictures. Anybody out here who ever saw one of the other five cars built? 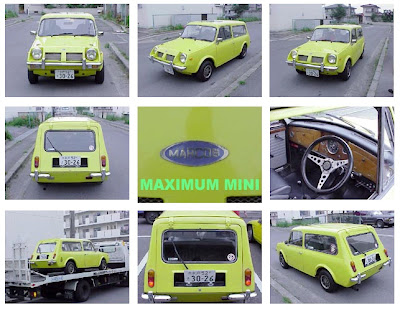