Other Deep Sandersons for sale

Will the Deep Sanderson 301 that I wrote about on Thursday really make 50K at auction this Saturday? (UPDATE: It won't, see here). It's clearly a historic machine, but it would also be the highest price ever paid for a Mini derivative (or at least that I know of - let me know when you know better). Anyway: I thought you might like to take a look at the prices that Deep Sandersons made in the past, and so collected some old advertisements. We've seen that the car that will be auctioned on the 23rd was advertised twice in the late seventies/early eighties for respectively £1000 (click) and £2000 (click), but here are some others: 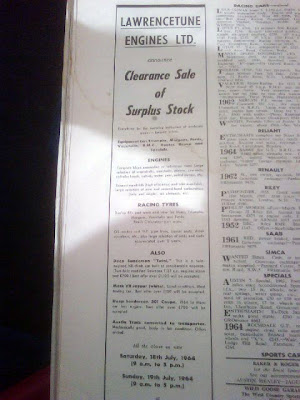 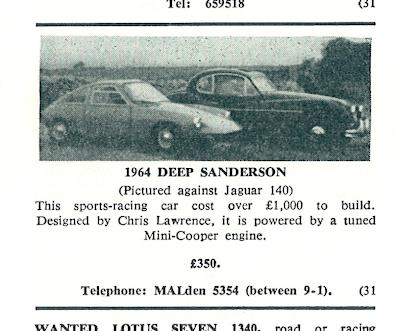 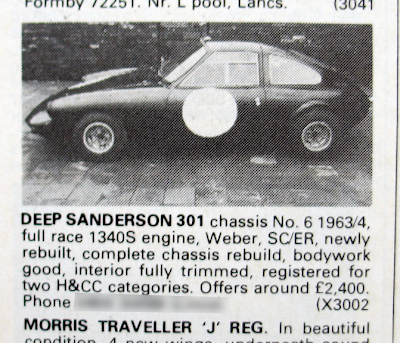 September 1980: the Deep Sanderson 301 with chassis number 6 is advertised for £2400
Picture: Jeroen Booij
Last but not least, this car (click) is currently for sale too. It is said to be chassis number '1001' but I have my doubts about that as it was built up in 2004 from an unused body and chassis with number '1007' that was owned by Chris Gow for quite a few years and later acquired by racer and collector extraordinaire Duncan Rabagliati. Christopher Lawrence took over the body and chassis from Rabagliati (for £5100) when these were sold at an auction in April 1998 and beautifully turned them into a car to race at the Le Mans Classic in 2004. It has to be the best looking DS301 and was also the car that was used for photographs in 'Maximum Mini'. Shortly after I photographed it, it was sold at auction to Japan for £34,500 in September 2005. The Bonhams auction catalogue described it back then as: "This car, chassis number ‘DS3GT 1001’ was one of the two 301 Coupés which were built for, and ran at, Le Mans in 1964. Driven by Chris Lawrence/Gordon Spice, this car was the one that actually took part in the race, the other having been seriously damaged at White House in practice (read the story here). After 40 years in storage the car was totally rebuilt by Chris Lawrence for the 2004 Le Mans Classic with the help of a partial road car kit from the Rabagliati Collection, and is wholly authentic with total documented history and FIA papers."
Geplaatst door Maximum Mini op 12:07