Personally I have never been a fan of Minis that are modified to non-A-series engines, preferring Mini-powered Minis that are not anymore recognisable as such over Minis that retain their Mini looks but have technically nothing to do with them anymore. But it seems not too many people go with me on this, and Canada based writer Iain Ayre knows this. Recently I got in touch with Iain and he was kind enough to send me a copy of his book Mad Minis. In one of its 31 chapters he writes: "I write for MiniWorld, which loves mad Minis as long as they retain the Mini shape. So you'll find stories about Z-Cars with GRP shells, which are kits rather then Minis, but you'll only rarely find a mention of Marcos or GTM." I would say that is a missed opportunity, but Iain told me he left MiniWorld recently to join Mini Magazine, so who knows what the future will bring.

But since quite a few of the cars in Mad Minis have been featured in MiniWorld before, too, you won't find many Mini derivatives in the book. Power-crazed oddballs aplenty though. There are Minis with all sorts of superbike engines and Honda Vtecs, but also with a Ford, Dodge and Chevrolet V8, Nissan V6, Mazda rotary, Suzuki 3-cylinder to even an estate with two Vauxhall 2-litre mills (I am not making this up). Some of them come with space frames and incredibly ingenious mechanicals. It's fun to read as Ayre's style is dry and witty, making fun of these contraptions in many cases, and giving an insight in the minds of their builders. Many of the times I was asking myself that one question: why? And fortunately Iain does not hesitate to actually ask that question to the creators, too.

In between all these truly crazy creations he did manage to squeeze in the current Mini Marcos Mk6 in a seperate chapter though. There are also chapters titled 'Offroad' about the Chris Hollier designed Mountaineer and the Scamp, featuring a Mk3; 'Trikes' about the Triad and the stillborn Brookland Swallow (a mid 1990s design by Ayre himself - more on that later) and 'Mini Kit Cars' featuring a Domino Pimlico, Hustler 6, GTM Coupe and Banham Sprint. You won't read anything new about them, but if you're after a fun book with some truly mad machines the 19.99 GBP cover price is not bad at all. 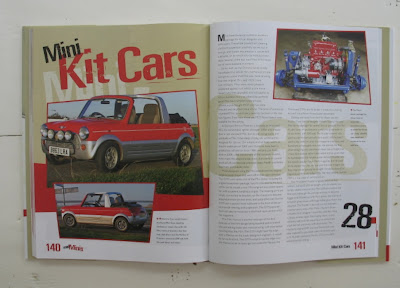 The Domino Pimlico is one of the Mini derivatives in Iain Ayre's Mad Minis
Geplaatst door Maximum Mini op 15:18

Email ThisBlogThis!Share to TwitterShare to FacebookShare to Pinterest
Labels: Books