Most of the Minis converted by Wood and Pickett are something out of the ordinary, but the 'Mini Gordon' surely must have been one of the more extreme conversions carried out by the London based coachbuilder. Within a small circle of enthusiasts it was known that the car survived in a suburb of Brussels in virtually untouched condition, with some 50,000 kilometres only on its clock. Now it is offered for sale for just under 20,000 Euros here.

The car was built for Belgium based Eric Gordon, hence it's name, and is said to have been unveiled at the 1976 Brussels Motor Show. But according to Francois Tasiaux from Brussels, it was seen for the first time in public in December 1975 at the Brussels Racing Car Show. The donor Mini used for the conversion dates from 1974 and the project is said to have been encouraged by two Spanish friends of Gordon: a dancer named Elena Vilar and a motor sports enthusiast and racer named Antonio Rodriguez Huerta, but the information that I have is sketchy. Perhaps someone here is able to tell me more about Eric Gordon and his Spanish friends?

The car itself is shortened by 37 centimetres and comes with added hatchback, giving access to a full bar, carrying special bottles and glasses! The cocoa paint job is said to consist of no less then 13 layers of paint of which the colour comes back in the wool rugs on the interior's floor. Apart from that the interior uses the signature Wood & Pickett dashboard plus door pockets and Recaro seats, all trimmed in ivory coloured Connoly leather. Quite a car for city traffic, I'd say. 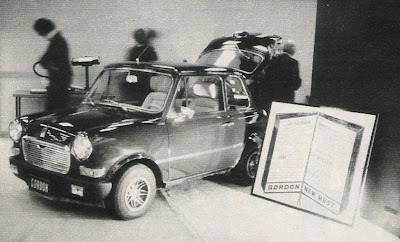 Mini Gordon on 1976 Brussels Motor Show. Who knows more about its history?
Picture: big thanks to Xavi Enrich 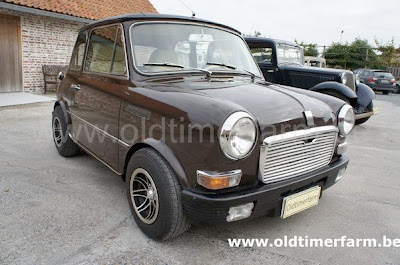 Shortened grille seems odd. Are those shield bumpers from a Renault 5? 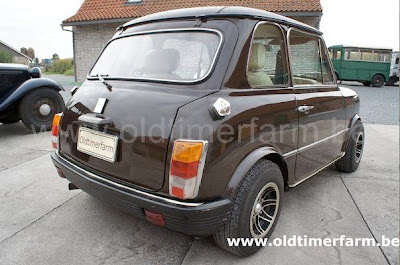 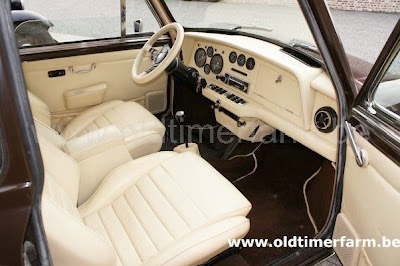