After Minis at Le Mans, the Camber/Maya files and Mystery Mini derivatives (that's still running here at an irregular basis), it's about time for a new series. Ladies and gentlemen, boys and girls, may I introduce to you Maximum Mini's Urban Legends. A series about Mini derivative tales that may seem as hard to believe as totally irrelevant for those who do not care. Contrary to the fan, like yourself (or so may I assume, dear reader). The main questions here are: what ever happened to..., and, is there a survivor..?

And to kick off I thought it'd be nice to do so with the legendary Butterfield Musketeer - the alleged earliest of Mini derivatives that was just finished in time to make it to the Racing Car Show in London of January 1962. When I started researching the Musketeer years ago information was about as scarce as could be, and all the magazine articles and books that did mention it quoted right from the brochure. Apart from that the sources that mentioned production figures at all, chatted about 6 cars built. Humbug, or so I found out for when I'd finally tracked down the Musketeer's instigator/designer/builder Richard Butterfield in the USA. He entrusted me no more then 3 cars were ever built (full story plus many previously unseen pictures in my book - you don't believe I am giving it all away here, do you?!).

Anyhow, and here comes the legend bit that keeps on haunting me: according to Butterfield "One went to a company in Portsmouth while the other became a prototype for a twin-engine version but was never completed." The third car was the original aluminium prototype that was rebuilt with Mini Cooper engine and raced at Brands Hatch by well known Mini racer Christabel Carlisle. The thing that I find hard to digest is that it remains unknown to this day what happened to all three cars. With the prototype being a fully handbuilt car (the body was hand beaten by Williams and Pritchard's) and with a slice of motor show and racing history, that's certainly not the kind of vehicle to end up in a British scrap yard. So how about the other two? They threaten to become the holy grail to Mini derivativism to me. So please, let there be someone out there who knows something about them... 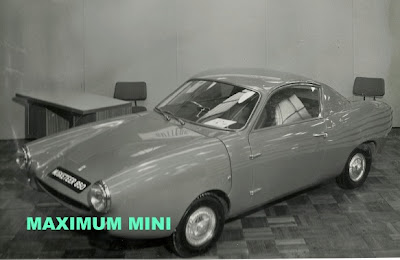