Since the last update on the CJC Bison, better known as The Mini Lamborghini, the project's progress hasn't exactly been smooth. In fact, since the fitting of the exhaust our anonymous handy man Buffalo Bill used his hecksaw for his next step: creating much needed more interior space. Back then he wrote: "It's going to get a lot worse I think, but will be worth it." The idea was to dramatically alter floor and bulkhead to win space. Sounds easy, but when some images were sent over to here - after the hecksawing took place - I wasn't so sure anymore about the ease of the job. As always, Buffalo Bill remained dead calm: "The one with no seat is the passenger side, you can see how much space has improved simply by leaning its all back and round by a couple of inches. The one with the seat is the drivers side, showing how much more room is round the seat. The upper part will be flat (like before) with just a bit of shaping to marry up to the side windows. There's tons of room now."

Nothing could stop our project man from improving the Bison's limited interior space
But then things got quiet for a while, and just when I believed the Bison was about to come to an unhappy end another message with more pictures arrived: "Cracked on with the bulkhead, it's about 95% done inside (just a bit more smoothing and odd spots around the windows need a bit more) and about 50% done outside (the whole upper part needs sanding flat, and the lower part needs more work). The seats fit fine though now, or at least as well as they ever will. I am really pleased how it turned out. Just the rest of it to do now!" You just have to admit this man doesn't give up easily... I also liked the comment of one of his friends: "Wouldn't it have been easier to have your legs shortened & your arms lengthened!?" 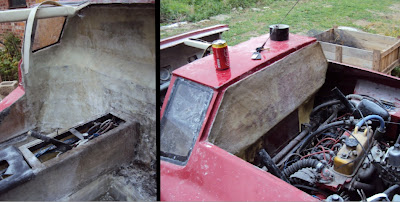 And this is how the beast looks now. It must be fun to cut out that rear window...
Geplaatst door Maximum Mini op 10:09