For the time being this is the last part in a series about the Camber GT and Maya GT cars that I know of. After having described eight cars from old pictures that I have and stories that I heard, the final Maya GT that I know of is a bit of a mystery. From the only picture that I have of it, its registration number can only partly be seen, clearly ending with '208H' which makes it a 1969 registration and thus a very late car, or build. It shows a white Maya GT with 10 inch J.A.Pearce wheels but that is about all I know. Perhaps some of you guys will be able to tell me more about it? 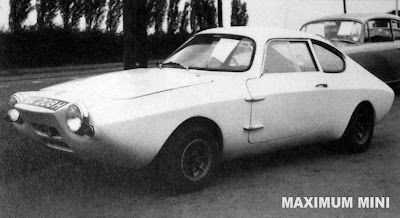 Find out more about the other cars described in this series by clicking on their registration numbers below: