What exactly is this Status Minipower?

It's not very often that a Status Minipower (also known as Status Symbol) comes up for sale, and I remember well that one came on the market in 2004. In fact it was not a complete car but one of the 20 ingenious chassis' built by Status founder Brian Luff in the early 1970s, and I have never seen another one being offered for sale since. Brian told me that of these 20 chassis sold only 8 buyers bought a body from him, too, turning them into proper cars. He recalled that most of the chassis' went to autocrossers who made a body of their own which was a lot cheaper.

Anyway. Meanwhile I have been in touch with Andy Downes who bought the Status chassis in 2004, and is eager to find out more about it now. But in fact it seems that this particular Minipower chassis was meant to have become something rather special. Andy wrote: "It is chassis number AS 72 and although similar to the one in the magazine (an article on the car that I sent to him-JB) it differs in that it is all square section tube (the magazine one has some round tubes at the front and round the ‘dashboard’). Also it has a roof/windscreen section (cut off by a previous owner) that can be seen in some of my pictures. Looking at my chassis it is markedly different to the one in the magazine article, in particular the roof bars which were clearly attached when new but cut off later and also the front rocking wishbones. So I presume there was more than one version of the chassis."

Naturally, these modifications could also have been carried out by somebody else. But the most interesting thing, perhaps, is that this actual chassis came with some intriguing design drawings that clearly seem to have been meant for this car. These drawings show the altered Status chassis plus a wedged body for it and they are marked 'ABH Design Group' and dated 1972 and 1973. Could ABH possibly have made production plans for this Mini based car? Andy would love to find out, and so would I. 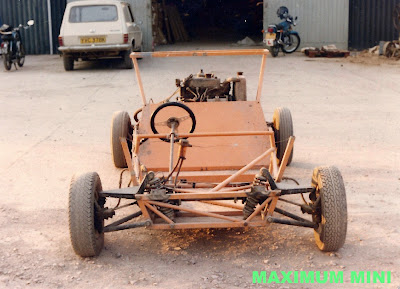 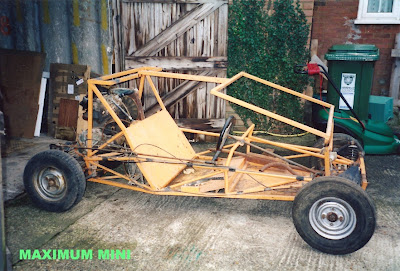 ...untill the cut off roof and windscreen section is put in its place 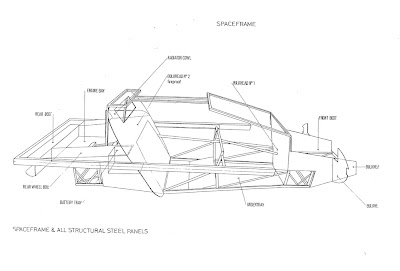 Design drawing is dated 1972 and clearly shows the same chassis 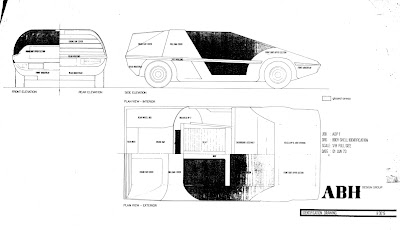 And there is a drawing for a wedged body, too. Who were ABH Design Group?