The mysterious decals of the Mini Mare

While chatting with Mini Mare owner John Stanmeyer about his car (more here), we drew the conclusion that three of the four cars that are known now come with a different decal on their bonnets. The white car resides on the isle of Sicily has none (but it wouldn't surprise me if originally had one, too); the other three do. They are an anchor (light yellow car), a ship's wheel (John's white car) and a clover leaf (bright orange car). Apart from that last one there appears to be a nautical theme here, which would fit the story as the cars were supposedly commissioned as tender to Fernandino Innocenti's yacht 'Anitella' in 1972.

John wrote: "The missing decal could indeed have been removed in a subsequent paint job, though unfortunate to not replace because I sense it was the original design. Until we repainted our back in the late 1970's (we masked around the wheel) I could feel that ship's wheel paint was not add-on but rather painted directly upon the bonnet... the transition between white body paint and wheel was flawless. Odds are the paint on the Mare when my father bought it was original because he purchased it in the early 70's. Also possibly interesting/connectable to the ships wheel on the bonnet is this — the interior roof vinyl, flooring and dashboard vinyl are all a deep sea blue, matching the exact same color of the blue ships wheel painted on the bonnet. I remember noticing this as a kid and now these discussions are making me recall odd connective bits such as this colour scheme of what I sense is the original design plan of the Mini Mares produced."

"By the way; I'm not an expert in any of this! Simply sharing insight into my car so someone else knows before I forget these finite details. I know more about Mars then Mini's..." To be honest I am not much of an expert into bonnet decals, but like John I am enjoying a good bit of sleuthing work... So there we go again: who knows more about these decals? 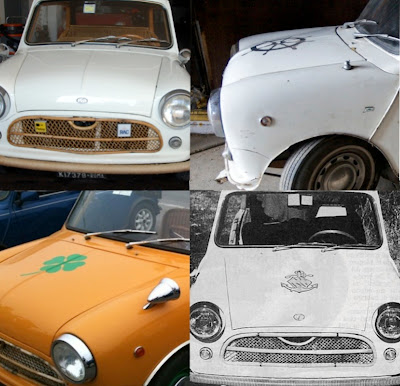